Anyone who knows me is aware that I value the existence of all living things. Ants should be treated with respect for they are here to work and create a future for generations of ants to come; unless, of course,  they’re infesting my kitchen floor and cabinets,  in which case I lose all respect for them. I don’t consider my existence any more important than, say, that of a cricket, even though crickets really creep me out and I had to buy them and feed them to my bearded dragons (may they rest in peace), sometimes having to catch one that went AWOL with my bare hands –eek! Maybe I deserve life more than lice, bed bugs, and fleas, but I don’t get all superior about it.

My friend Alyson calls me “Snow” — short for Snow White– because over the years she has been a witness as I have rescued and rehabilitated, when feasible, a number of wild animals and then set them free, back to the wilderness that is the suburb in which I live.

I hold the Guinness World Record* for keeping goldfish alive. If Richard sets a mouse trap he has to do so without my knowledge and without providing me with a postmortem. I take spiders outside even during Chicago winters. I am aware they normally don’t thrive in sub-zero temperatures, but at least I don’t feel directly responsible if they get the flu.

One lovely summer afternoon last year as I was admiring the beginning of the sunset across the golf course from our front yard I noticed a preponderance of flying things swirling around one of the pine trees. Their movement was familiar, and not in a good way. Flies seem to move about in quick, seemingly random paths. These UFO’s moved more slowly and deliberately, as if working together. Plus I’m pretty sure I heard them drone on about a queen, or something.

So, because I wanted to see what all the buzz was about, I inched closer to the tree, slowly saying the mantra I always say to myself when I have a hunch that whatever I am about to get myself into isn’t going to end up in a soothing drizzle of rainbows and puppies, “No sudden movement”.

The closer I got to the tree the more of them I saw. And then I saw this. 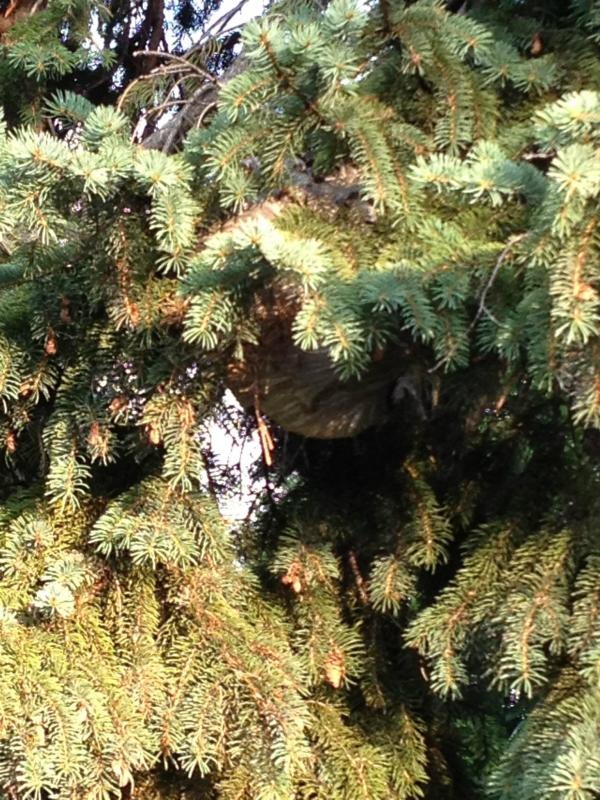 I moved in a little closer and then I saw THIS! 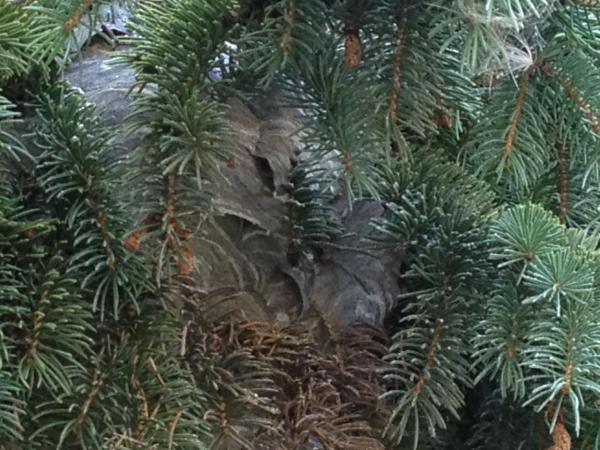 At first I was mesmerized by it’s beauty. Surely something so delicate and lovely couldn’t be dangerous. As I lifted a finger to touch it an imaginary mini-Richard jumped onto my left shoulder and yelled, “STOP!” Buzz kill.

Instead of touching it I began to tiptoe away while saying to myself, “No sudden movement”.

What to do? What to do? Clearly this was a hive of sorts. Clearly the hive housed a gaggle of bee-type things. Clearly I had to call someone to help me decide what to do. But, remember, I don’t kill things, so I had no idea who to call.

A friend suggested Pest Solutions. I liked the name because it sounded as though they really cared about pests and would probably just relocate the nest.

Justin arrived from Pest Solutions, took one look at the nest and whispered, “No sudden movement,” as he motioned for me to follow him as he slowly backed away from it. “That’s a Bald Faced Hornet’s nest. I have only ever seen one other. They are bad. This has to go”.

I would normally want a second opinion, but the terrified look on Justin’s face was enough for me to believe him. I wanted to ask him if they really have Bald Faces, but didn’t think he would care all that much whether the insects were fuzzy or not. “I think you should go back inside, Ma’am,” he said. “I have to go back to the base and get what I need to kill these things. I will probably have to come back to treat the nest tomorrow, and at least once more. These things don’t die”.

I followed orders and waited inside until Justin returned. When  I saw his truck I walked outside on the opposite side of the yard from the nest and overheard him on his cellphone. “Yeah, man. It’s huge. You gotta come see this”. He said a few more things into his phone and then told me he had called a buddy who also worked at Pest Solutions because he’d never seen a Bald Faced Hornet’s nest. Unfortunately his buddy was busy with other pests and couldn’t come over. Then Justin called his wife, told her he loved her, asked her to kiss the kids for him, said a prayer, and told me he was going to get the supplies from his truck. He instructed me to go back inside the house and not come out. He said he’d be back the next day. I took this picture from the safety of my office window. 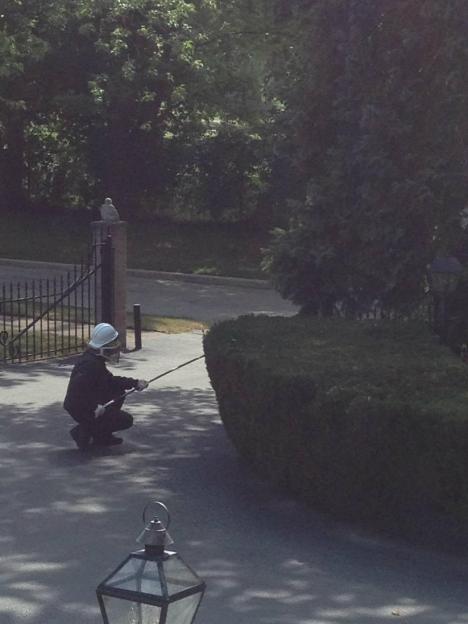 Using a long beepole, Justin puffed Alpine dust into the nest from as many angles as he could. And then he was gone. I called Richard and the kids and told them not to come up that side of the driveway and to run into the house as fast as they could.

As promised, Justin returned the following day. If I were a betting man I’d have bet he’d have brought his buddy with him. Luckily I’m neither a bettor or a man because he arrived solo.

He peered into the nest and declared the inhabitants dead. He used the beepole to knock the nest down. As soon as it hit the driveway I said, “I think I see movement from inside”. “Step away,” he said, as he ran back to his truck for heavy duty poison.

After drenching the hive in “hornets-be-gone-with-fresh-lemon-scent”,

Justin said the hornets were really most sincerely dead. 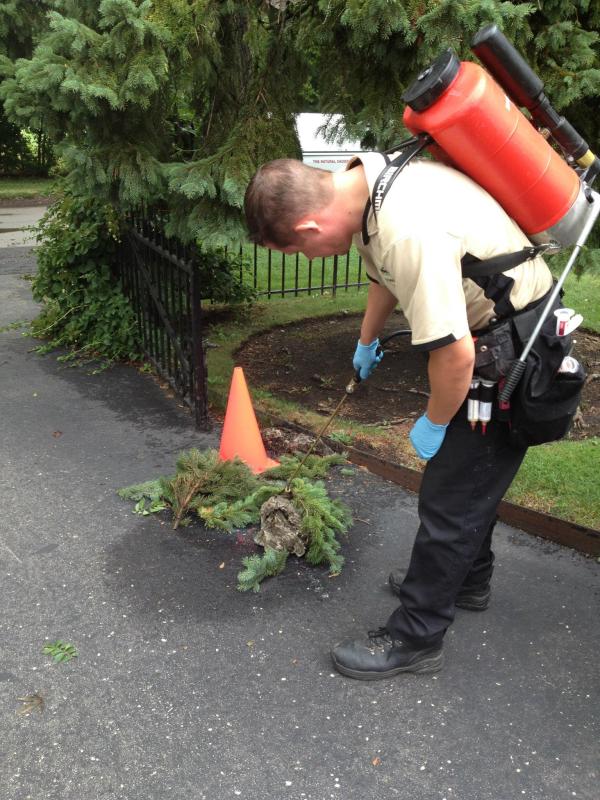 The “Snow” part of me felt bad about destroying such a beautiful work of nature, but I knew it had to be done. 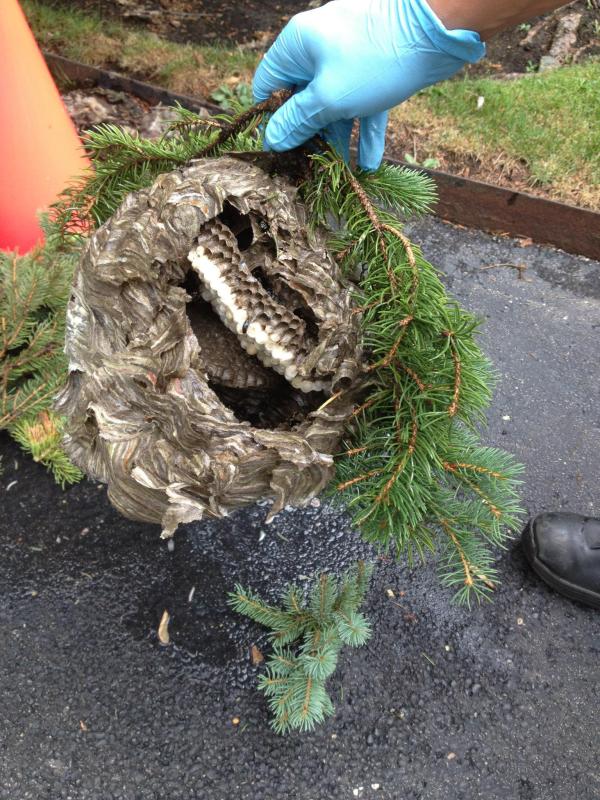 I took these photos to illustrate the size of the hornets. Look! No facial hair! 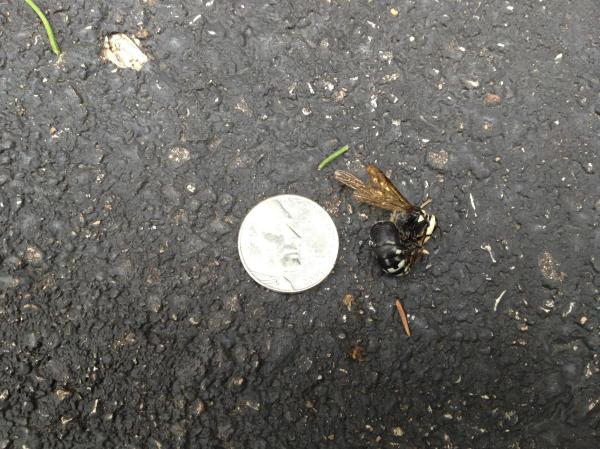 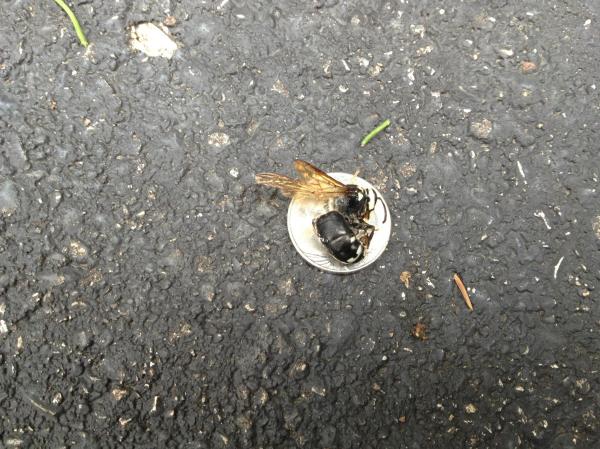 I  began writing this story on June 6th, 2013.  That very same day, at 11:45 A.M., Pest Solutions left a message on my cell phone asking if we had any Bald Faced Hornet’s nests, or other pests that needed to be “relocated”. Freaky! I’m just saying…

So, I actually found the invoice that was dated July 17th, 2012 when Justin saved the day. I normally can’t find things so this was a big deal for me. This is what the invoice said:

“Pest Total: About 100. Exterior- Yard: Treated one eye-level basketball-sized Bald Faced Hornets nest in tree off driveway. PLEASE STAY CLEAR OF AREA FOR AT LEAST 24 HOURS!!! Hornets are VERRY aggressive and will sting!!!” That part was also highlighted and circled.

Thankfully we haven’t seen any nests yet. It hasn’t been hot here, and it’s still pretty early in the season. But if I ever see or hear anything like that again, you can bee sure I’ll call Justin and tell him to bring his buddy with him.

* This statement has not been substantiated by Guinness World Records.